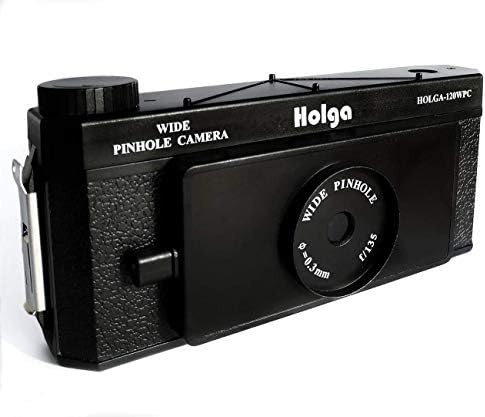 [ad_1]
Accessories Included:
1 Carrying strap
1 Frame Size Mask of 6×12 cm
1 Frame Size Mask of 6×9 cm
Being a pinhole camera, as light doesn’t have to pass through any lens, the images taken will have below characteristics:
(a) no optical distortion whatsoever to the image;
(b) no need to focus;
(c) the angle of the view will be much wider.
Having a greatly extended body, the camera enjoys a super wide panoramic view with the horizontal exposure angle reaching as wide as 120 °. Depending on which of the two Film Size Frames is used, the width of the film for the picture taken can either be 90mm or 120mm.
With special feature of multiple-exposures effect, it will provide more latitude for the photographer to try out his/her imagination. This makes photographing more enjoyable and brings one surprises.
As longer exposure time is needed for pin-hole cameras, it’s necessary to mount the camera on a tripod as well as use a Shutter Release Cable (they are not included). For the convenience, there is an exposure table on the back of the camera body to provide some reference for deciding the length of exposure time needed according to the condition of the weather or time of day.
Let us return to the original nature and record every different and precious moment by using Holga camera!

Pinhole Exposure: It lets light pass through the pin hole, to hit the film directly, causing exposure without passing through any lens.
Panoramic View: The camera enjoys a super wide panoramic view with the horizontal exposure angle reaching as wide as 120 degree. Aperture: F133.
Film to Use: Accommodate all 120 format films. The use of exposure speed ASA 100 films on sunny days and ASA 400 on cloudy days or indoor occasions is recommended.
Two different Frame Size Masks: one is for 8 frames of 6×9 cm each per roll and another is for 6 frames of 6×12 cm each per roll.
Multiple-Exposures Effect: As the film is advanced manually, the camera can help achieve special effects through multiple exposures by NOT advancing the film after a frame has been exposed. Each depression of the Shutter Release Button will bring about another exposure.